Awakenings: The Push-Pull of Letting Go

February 20, 2013
I suppose I never really believed that Nicholas could live
apart from us – that he could feel truly safe and happy with his caregivers
fussing over his tube feeds, multiple medications and his endless appetite for
exploring sports and technology.  But, I
finally accept that Nick IS happy.  He
feels safe… until he is ill.  That’s the
only time when he still wants me and only me.
Oh, and he still wants Dad for cash and hockey talk.
This new state of affairs – one which our whole family has
worked so hard to create – is … strange and even slightly disquieting.
I remember seeing the film “Awakenings” a story of catatonic
patients who ‘wake up’ after being treated with L-Dopa, a form of dopamine,
which is sometimes used in the treatment of Parkinson’s disease.  Based on a true story and originally written
by the neurologist Oliver Sacks, I was especially moved by the subplot
involving one patient whose character is played by the actor, Robert De Niro.  De Niro’s character has not spoken
or communicated at all in many years, yet every day his mother visits, quietly
telling him the neighborhood news and arranging his pillows.  She is mystified when her beloved son wakes
up.  He wants to go dancing, to tour the
city, to see women his own age…. all without the company of his mother.  So, when the dopamine mysteriously stops
working and De Niro’s character sinks back into the oblivion of catatonia, his
mother returns to his bedside and sings gently to him, stroking his head.   This is a woman who has given her entire
adult life to looking after her son.  She
has ‘come to grips’ with a certain, predictable reality.  She does not know what to do when that
reality changes into another that has no place for her.  In the instant when the ‘awakened’ Di Nero
rejects his mother, we see her recoil, appalled suddenly at the meaningless of
her life.  And when De Niro once again
falls into his permanent stupor, we see his mother sigh softly with relief as
she returns to her caring role. 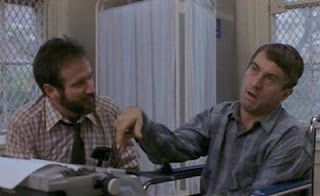 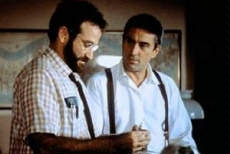 Make no mistake, this letting go business is hard going for
mothers and fathers.  It is bittersweet to
see any child grow up, but doubly so when vulnerable sons and daughters leave
our care to depend on others who do not adore them as we do.   But I know that young arms lift more surely
than old arms.  Young bodies can stay
awake to monitor respiration overnight.
And Nicholas has learned these lessons.
He knows, as we do, that growing up is natural.  It is natural too, to seek out like-minded
friends/caregivers who are strong in body, soul and sense of humor.  Nicholas has not stopped loving us, but he
has started trusting others to keep him safe and who can create the
circumstances for a rich life – a rich life that will be sustained after we die.
Life is a funny old thing.
Now that my son is more or less settled (until the next crisis, at least),
my Mom needs me more.  The old saying
goes, “Where there’s life, there’s love”.
I might add, “and where there’s love, there is caregiving.”  I don’t expect that I will ever NOT be caring
for someone in my life because I am blessed with many loving relationships.  I want my children to grow up and I want to
discover new ways of caring for them.  I
want to discover new dimensions of my mother through our changing roles.  It’s a push-pull process, this growing up,
growing out and growing into… but it is all alright as long as there is love.
Share this post