It was several years ago in London when I first met Canada’s Governor General David Johnston and his wife Sharon.  My husband Jim is retired now after 37 years in the diplomatic corps but between 2006 and 2011, he served as the High Commissioner (Ambassador) for Canada to the United Kingdom.  The Governor General is the Queen’s representative in Canada, so Jim and I had ample opportunity for both official and casual conversation with the Johnstons over the years. 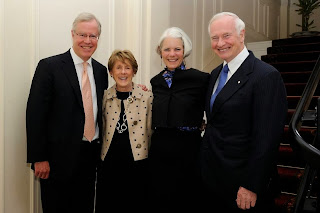 I found a friend in Sharon Johnston immediately.  She has a PhD in physiotherapy and had worked at the Holland Bloorview Kids’ Rehabilitation Hospital in Toronto, an old haunt of ours.  Our family used that hospital’s specialised services for Nicholas when he was small.  Both David and Sharon Johnston began their tenure in the office of the Governor General with a strong personal mandate to celebrate families and nurture philanthropy in our country.

I was pleased and impressed recently to see that they have launched a new legacy initiative called “My Giving Moment.”  Here is Governor General David Johnston’s giving story:


And this initiative is great news for Canadian caregivers, because volunteering citizens across the country will be encouraged to lend a hand to those giving and receiving care.

Listen to how Danielle helps in her community:

The My Giving Moment campaign is a great idea for all Canadians.  There are loads of ideas on the site about how to help caregivers and their families and some folks have already committed to make those actions their ‘giving moments’.  We have a new playbook for giving in Canada, so let’s talk about it with friends and neighbours, share it on facebook and email, participate and make use of it for giving and receiving care!