A Celebrity Visit…and What Happened Next!

Who doesn’t love to meet a celebrity?  There’s something glittery, larger than life and romantic about getting up-close and personal with someone who is famous.

Nicholas is a die-hard sports fan.  He writes a blog about his beloved Ottawa Senators NHL hockey team, he has a twitter account for general chat and he manages a facebook page about ‘old school’ professional wrestling.

Nick has always been a fan of ‘WWE’ (or WWF as it used to be called) pro wrestling.  At first, Jim and I did our best to discourage him – couldn’t our son turn his attention to music or literature or history?  Anything but wrestling!  But Nick was determined to LOVE the crazy spectacle of good and evil played out in nightmare proportions, often with bawdy humor and even blood letting.  I began to scan the audiences at the WWE – the front rows were filled by people with visible disabilities.  Grandmothers in the upper rows cheered their heroes and booed the ‘heels’.  Clearly, there is something about the stars of World Wrestling Entertainment that appeals to people who receive care at home.

Fast forward to last week.  A message arrived in my inbox from Nick and his helper, Josh.

Check this out:
https://photoops.at/ottawa-pop-expo/2013/
Bret Hart is gonna be there!!!!  (didn’t your friend at March of Dimes say he works for them sometimes?).  The Honky Tonk Man is also gonna be there too.
I won’t be able to go because I have the operating room dentist the day before,  So do you think we could get Bret Hart here to Rotary for 5mins?  It’s happening not far away at the Ernst & Young Centre.
-Nicholas Wright-
Sports Media Research Analyst
“You’ll Never Walk Alone”  -Liverpool FC
The retired (and very famous) WWE wrestler, Bret the Hitman Hart is a spokesperson for the March of Dimes in Canada.  A stroke survivor, he uses his bravado and fame to inspire others with disabilities and he does so with generosity and empathy.  I contacted my friend and colleague, Andria Spindel, the CEO of March of Dimes Canada and the wheels began to turn.  Yes, Bret would visit Nicholas!  Nick was feeling still feeling a bit woozy from the general anaesthetic he’d had the previous day, but he dressed in a WWE t-shirt and said ‘yes’ to getting out of bed and into his chair.  Soon enough, a black limo arrived and two men emerged.  Bret was instantly recognisable and the younger man introduced himself as Arda Ocal, former wrestling sports journalist and now TV weatherman in Ottawa.  Nick did a double-take with Arda – this was the anchor of Nick’s favorite wrestling talk show, Aftermath! 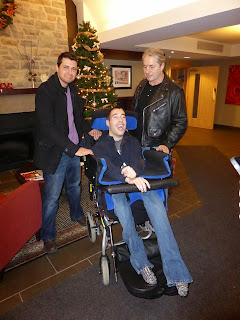 Everyone was in awe of Bret – he’s larger than life.  Children and adults at Nick’s home excitedly asked for autographs and photos.  This was one gentle giant who put everyone at ease right away.  The chatter turned electric with Nick asking, “who do you think will win the next world championship?” to “I have a sports blog, could I interview you?”
Nicholas has always wanted to be a sports journalist – in fact, he has taken online college courses to hone his writing skills.  Arda and Bret were keen to collaborate and we thanked them profusely.  Nick was exhausted, but happy after his new friends left, almost late for their engagement at the Pop Expo event.
Never one to let an opportunity slip away, Nicholas composed a series of questions for Arda (who still writes about wrestling for newspapers).  The interview appeared on Nick’s blog HERE.  Nick was happy and grateful – we all were.
So, we were stunned and ecstatic when a couple of days later, Arda sent Nick a link to an article he had written for the Baltimore Sun featuring none other than Nicholas Wright, sports blogger!
By Arda Ocal
For this edition of our WWE pay-per-view predictions, I’ve added a little special twist. Last week, along with WWE Hall of Famer Bret “Hitman” Hart, I had the pleasure of meeting Nicholas Wright, who is a huge WWE fan
. Nicholas writes a blog on wrestling as well as hockey, on which he did a “tell-all” interview with me.
I invited Nicholas to join me this month to predict outcomes for the WWE TLC PPV:

Our family is deeply grateful to Andria and Ruth at March of Dimes Canada, to Bret Hart and to Arda Ocal for their kindness and generosity.  Nick is inspired and still feeling the glow of his celebrity visit.  Now, can I think of a celebrity to visit my Mom and rejuvenate her?  I am really starting to think that there’s powerful medicine in visits like this! 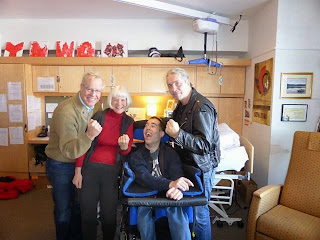