Justin was 3 days away from his 18th birthday when he had a heart attack.  He was lucky that his sister heard a strange noise and woke up to find him on the living room floor and called 911.  The doctors told his mother (a widowed single parent) that Justin had a heart condition caused by a genetic disorder.  He was in the cardiac unit for a long time – they implanted a cardiac defibrillator in his chest and had to try several kinds of medications before one worked.

Justin’s mother had recently been laid off a job she had for 17 years when the factory closed – she had two new part-time jobs when the heart attack happened – and lost one of them being at his bedside constantly for the first month of his hospitalization. Justin is my son’s friend – both have developmental disabilities and were introduced one day by a support worker who thought they might get along.  They had enjoyed hanging out together for over two years – meeting at the I-Hop for pancakes and then heading to the gym for a swim and a workout (and a great deal of horseplay). 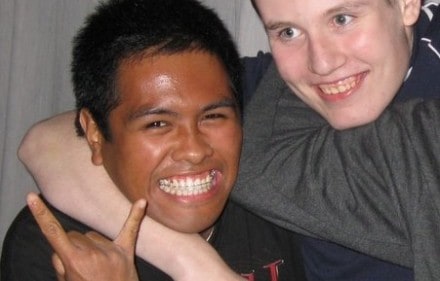 Now, in the hours spent in anxious bedside vigil, I had time to get better acquainted with his mum.  She worked so hard to provide for Justin and his sister, but I could see the growing weight of her anxiety as the days passed and bills went unpaid.  Like many parents of kids with disabilities, we talked of our sons’ struggles to navigate through the world, and of their gifts. Because I had just been through the process with my own son, I helped Justin manoeuvre through the provincial disability benefits system (PWD), and within 2 months he was now getting his own cheque every month from the province and his health care paid for.  Not a minute too soon, as his mother was behind on the rent again and terrified that they may be evicted and homeless.  I was shocked to learn that his mother had never heard of the Disability Tax Credit (DTC) – I explained to her that Justin’s doctor would have to fill out some forms to verify his disability, that I would help her fill out some forms to have her taxes re-assessed for the past ten years once he was approved.  Because she lived in B.C., the government would then refund her around $15,000 (in some provinces – like Saskatchewan- it could be even more).  She shook her head and said that would be like winning the lottery – she didn’t believe me at first.  I told her that it would take some time – probably 6 months or more – but that the money would come.

.
…and it did.  About 6 months later I was meeting her at the mall for coffee – I asked her to check her mailbox on the way. She arrived beaming – grinning from ear-to-ear as she pulled the cheque from her purse with shaking hands to show me.  The next day she called me and said, “now I can sleep at night” because she had gone to the bank and paid off all her debts – Justin’s braces, overdue bills – everything. I told Justin and his mum now that their lives had stabilized, it was time to start saving for Justin’s future by opening a Registered Disability Savings Plan (RSDP).  I explained that you don’t need to have any money to open an RDSP – once you qualify for the Disability Tax Credit, you can just open an account and if you have a disability and low income, the government will put one thousand dollars a year in the account for up to 20 years.  I explained that if Justin (or his family or friends) could afford to put a minimum $1,500/year into his RDSP account, then the government would contribute up to $4,500, turning it into $6000 EVERY YEAR.  Last week Justin, his mum and I met at the bank and opened his RDSP.  Justin will be depositing $125 every month into his RDSP – he understands that this is “no touch money”, that if he lets it grow he will have the secure financial future neither he nor his mother ever dreamt possible a year ago.

.
The RDSP, or the Registered Disability Savings Plan, is a unique savings plan specifically designed for people under the age of 60 with disabilities in Canada.  It is the first of its kind in the world, and includes a government grant and bond (depending on income).  If the person with a disability qualifies for the Disability Tax Credit – they don’t even need any money to open an RDSP and the government (dependent on the person’s age) will still contribute $1000 annually for up to 20 years! This plan allows savings to grow in a tax-deferred environment where anyone can contribute to the plan, including family, friends, neighbours, groups, and sponsors. It is a powerful tool for securing the financial stability for the future.  To find out more about how the RDSP may change the life of your loved-one with a disability go to www.forthefuture.ca to find an info session in your area!

*Visit www.forthefuture.ca to attend a free RDSP information session near you.