Reflections of the “Integration Generation”

“When we were growing up,” Cat Main recalls, “my parents did everything they could to make sure that my sister Kirsteen had all the same opportunities as my brother and I.  When we got a swing set, my dad made a special swing that Kirsteen could use;  when we got bikes, he made a special seat for the back of his bike so she could come with us.  She went horseback riding, sailing, skiing . . .  the list goes on.” 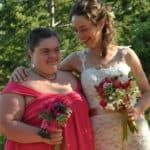 Both Sylvie and Cat really value this perspective, recognizing the tremendous effort required of their parents and other visionaries of the time to keep their children with disabilities out of institutions, segregated classrooms and more.  “They needed to push the pendulum that far,” Cat emphasizes.Cat’s friend Sylvie who also grew up with a sister with a disability, smiles as she explains, “Cat and I call ourselves the Integration Generation because it was so important in our families that our sisters have the same opportunities as the rest of us.  There was a big push in the Community Living movement at the time to close institutions and have integrated classrooms etcetera.  Inclusion was the big goal.  Cat and I grew up in that culture, living out its values.  It definitely shaped out world view.”

At the same time, both women describe thoughts and feelings that, even now, seem almost taboo.  “Things were pretty different for our families.  Our lives are different in a lot of ways.  And it’s important to be able to talk about those differences for better or for worse.”

“It started with me being able to acknowledge that my sister and I are very different physically,” says Cat.  “It sounds really basic but initially it felt quite wrong to actually look at that fact directly.”

Because the sibling with a disability often needs more care and support than the typical sibling, it’s easy for the typical sibling to feel jealous or resentful of that extra attention.  Both Cat and Sylvie say how important it is to be able to own and process those feelings.

“As a child you think if I get this mad it means that I don’t love my sister anymore.  It’s very freeing to realize you can both love your sibling and have these very intense emotions.”

They also talk about the struggle of confronting the outside world’s reaction to their sisters’ disabilities.  “In our home we learned to accept my sister for who she is, this unique individual like the rest of us,” says Sylvie.  “But that understanding got challenged at a very young age when we interacted with the outside world and began to see her through the eyes of society as someone ‘different from the others’.  This is challenging because you are left trying to reconcile the two views of your sibling, one from within the family and one from without.  An example of this is how I appreciate my sister’s poetic way with words while the world judges her as ‘developmentally delayed’.  Or another example might be the way Cat enjoys her silent time with K which others may view as ‘lack of communication’.”

Being a sibling of someone with a disability has affected them both in very positive ways as well.  “When we were growing up, anything could happen at any time,” Cat laughs, adding, “and it did.”  As a result she and Sylvie both consider themselves to be very flexible and patient.  They are also used to being seen.  “We’re totally ok with letting our inner eccentric out,” Sylvie jokes, having learned over the years that having extra attention in public isn’t a problem.  “I’ve learned to just be who I am and not apologize for it.”  Cat’s experiences with her sister have helped her “get past peoples’ exteriors and hunt more deeply to find out who they are.”  Both siblings talk about valuing the uniqueness in others and relishing the moments when they can let the world slow down in order to be present with someone.  “My sister reminds me to ignore all the little worrisome details and just be in the moment,” Sylvie adds.

When Cat and Sylvie first started exploring with each other their experiences as siblings, they quickly became convinced it was important for siblings to connect to talk honestly about the joys and challenges of being a sib.  The women have been working to create Canada’s only group for adult siblings of people with disabilities, with workshops and coffee chats in Vancouver as well as an on-line presence.  To find out more about what they are doing, as well as other North American resources for “sibs”, please go to their Sibslink website:  www.sibslink.blogspot.com, look for them on Facebook or email them directly: sibslink@gmail.com .