Taken from Safe and Secure: Six Steps to Creating a Good Life for People with Disabilities 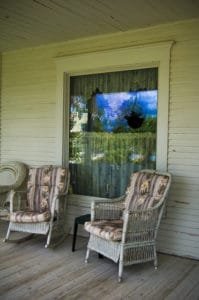 My wife and I always expected that Rick would stay in our home. We thought perhaps the local community living association would take it over after we died, and turn it into a group home. Then Rick and others like him would live there.

“After attending a PLAN workshop on Letting Go, I began to wonder whether I was holding onto ideas that weren’t in Rick’s best interest. I had no idea if he would enjoy living with other people. I didn’t know how he’d react to having staff supervising him. Well, actually I did know. Rick had lived in a group home years before and it hadn’t worked out.

“Maybe I’m being a little stubborn here,” I thought. Maybe it would not be best for Rick after all.

“I thought I’d better take this up with Rick. He didn’t think too much of the idea at first. Then all of a sudden it was decided. Rick would move. Rick and his Personal Network decided, that is, not me. It was quite a shock.”

Their neighbour across the street who had been invited to the first meeting knew of a vacancy in an apartment building that was centrally located. So Rick moved out. “It’s a start,” says George. “The apartment’s his home now–he doesn’t have his old man there to bother him.

“Fortunately there have been no big problems. He took it in his stride. Actually he has matured quite a bit as a result of the move. He likes to boast that he knows all 15 people in the building and they all talk to him. What a difference from his old neighbourhood where so many of the people he knew had moved away. And I must admit I like the idea that he is surrounded by people who accept him and, in their own ways, check up on him.”

And there’s more. Rick has just found a two-bedroom apartment in the same building. Bob, his friend since childhood, is moving in with him. George suspects Rick has at least one more move ahead of him and that it will be into a place he owns himself, or at least a home that Rick’s discretionary trust owns on his behalf.