Am I An Abuser?

All this talk of torture in my last post got me wondering about the most awful times of pain and suffering in our own Nicholas’ life.

When Nick was small, he had a surgical procedure to correct gastroesophageal reflux disease, or GERD.  The procedure was called an ‘open full-wrap fundoplication’.  Sometimes words like water-boarding or enhanced interrogation techniques do not sound so bad if you haven’t witnessed them first-hand.  The same goes for an open fundoplication.

From my book “The Four Walls of My Freedom“, here is a reminiscence of Nicholas returning from the operating room after this day-long surgery that involved breaking his breast bone and opening his rib cage in order to wrap part of the stomach around the esophagus and staple it to prevent reflux.  They also inserted a feeding tube in his stomach.  He was two and half years old.

“Another hour passed and I asked if she could find out when Nicholas would be back with us.  It was dusk now and she said that Nicholas was in recovery, but was “breath holding” so they were keeping him a little longer to monitor the situation.  Twenty minutes later a nurse and an orderly appeared down the hall wheeling a cot towards us.  Inside was Nick, his mouth open and rigid, eyes wide with panic.  He gasped, writhing, and exhaled a hoarse cry.   He was in the room now, and we hovered like birds, flapping uselessly.


That night was the first, but not the last, time that I saw in my son’s eyes a terrible pleading.  I turned away and put my hand down on the corner chair to support myself from falling.  Jim warned, “Donna, you can’t do this.  Come here!”  I came back to Nicholas, murmuring apologies through tears.”


I felt utterly responsible for my baby’s terrible state.  My feelings of self loathing only increased in the many follow-up hospital appointments when doctors would order me to restrain my flailing boy when they performed some painful, but necessary procedure on him. 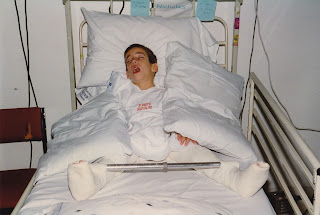 (Nick after an orthopaedic surgery in 1991)

When I recall those dark days, I still think of books and movies about awful abuse performed on children by mentally ill parents.  What on earth could Nick have believed about me, his trusted mother, when one minute I was holding him down to endure a painful procedure that he didn’t understand and the next minute, I was cuddling him and soothing his hurt?

I don’t know if it’s better to be with your child during those procedures or not.  I chose to be there, and I thank God that Nicholas forgave me. 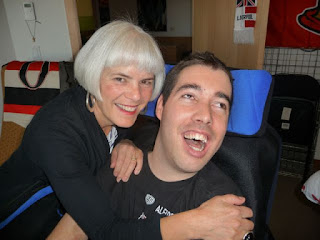 What I learned from my experience though, is a great respect for the way that nature made Nicholas and the dangers of trying to change him.  Witnessing pain in anyone is a terrible thing, but participating in painful medical procedures of someone you love is almost unbearable.