There’s an interesting trend in caregiving.  Women who have had their lives and careers de-railed suddenly by ‘extreme caregiving’ are taking their lessons learned and crafting them into new careers of helping others on a similar journey.

I became interested in this phenomenon and wrote about it in my book, The Four Walls of My Freedom:

Rosalyn Benjamin Darling points out in her research on
parents of children with disabilities that “When parents continue to encounter
needs that cannot be met by existing societal resources, they may embark on a
prolonged career of seekership.  The goal
of seekership is normalization, or the establishment of a lifestyle that
approximates that of families with only nondisabled children.  Seekership results in advocacy and activism
when certain situational contingencies or turning points occur.  Such
activism Darling calls ‘entrepreneurship’.
One has to be socialized into the role of entrepreneur, and socialized I
was.  The confluence of the changing role
of women, opportunities for our higher education and the booming economy all
provided fertile ground for the flourishing of my skills as an entrepreneurial
activist.  Darling continues “For most
parents, active entrepreneurship ends after they reach what they consider to be
normalization,” while for some it continues to “crusadership.”  These are the parents who continue to work
for disabled children and adults even when the needs of their own children are
met.

It is not just parents of children with disabilities who become seekers, entrepreneurs and crusaders.
Earlier this week, I had the pleasure of speaking with a caregiver crusader, Cindy Laverty.  Cindy is a California based caregiving coach with an impressive range of multi-media tools to help people survive and thrive throughout their caregiving journey.  Cindy has a kind heart, a keen intellect and a will of steel.  She founded The Care Company to help others and this is her story.
Me:  Cindy, tell me about yourself.
Cindy:  My ex-husband and I had been divorced for fifteen years, but his parents, Bob and Puff were wonderful grandparents to our daughter and we remained close.  Puff, sadly, suffered badly from early onset dementia and Bob cared for her.  Every Sunday night, Bob, my daughter and I would have dinner at the same restaurant, at the same time and have the same food from the menu.  Bob called my daughter ‘The Butterfly’.
One Sunday night, Bob took my hand and said, “I have a favor to ask.  Will you pay my bills and check on Puff when I have open heart surgery next month?  I’m having this surgery because I want to see The Butterfly graduate from college.”  I was shocked and tearful, but I replied immediately, “Of course!”, never realising in that instant that my life would change completely.  I was utterly unprepared for what happened next.
I was working at that time as an events coordinator for a fitness company, so it was relatively easy to put the legal documents such as powers of attorney and Bob’s will in place before his surgery.  Bob entered the operating room for a ‘routine valve replacement’.  It was not routine.  Bob spent two weeks in the ICU, then suffered a debilitating stroke.  Rehab followed.  In the meantime, Puff and my in-laws’ home was falling apart.  I discovered that Puff had not had a bath in five months.  There were leaky pipes in the house and crumbling ceilings.  I fired the caregivers and quit my job to take care of both Bob and Puff.
I felt like I was doing everything wrong.  I felt so guilty about not being with my own family enough and I felt like I wasn’t doing enough for Bob and Puff.
One night, lying in bed, a voice in my head spoke to me:  “You know this about you”, the voice repeated.  I realised suddenly that I was on a journey.  It wasn’t going to work to try to be in charge, but I didn’t yet know another way.  In that moment, I understood that caregiving knocks you down until you listen.  It does not discriminate.  I realised that I needed to get help for my in-laws, yes, but I needed to get help for me, too.  I knew that I was falling apart, but I knew I didn’t need a psychologist or medication.  I needed a coach.  I remembered being on sports teams in high school – I needed a coach to teach me the fundamentals, to cheer me on and to push me up the mountain when I faltered.
So, I founded The Care Company.  I founded The Care Company so that people would not get lost on the journey, as I did.  Puff died two years after I started the company, and then their daughter, my ex-sister in law, passed away from breast cancer.  Four years after Puff died, my dear Bob passed away… but not before he was able to see his “Butterfly” graduate from high school. 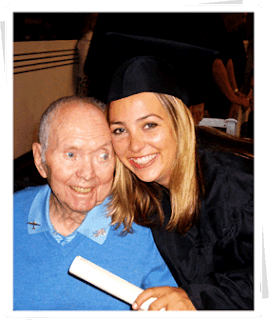 Me:  You work with many clients who are overwhelmed by their caregiving responsibilities.  You come to know your clients intimately.  What have you learned from them?
Cindy:  I have learned that some people are selfish and some people are good selfish.  The ‘good selfish’ caregivers are able to take time and space for themselves.  They have boundaries in place.  I have learned that people are resilient.  But, I have also learned from my clients that those who listen to their hearts instead of their heads do best.  I call caregiving ‘angelwork’.  When we give credit to ourselves for doing angelwork, we do better.  My clients have taught me about courage.
Coaching and the range of caregiving tools available from Cindy are not free.  Cindy now makes her living by helping others survive a journey that she nearly did not survive herself.
I’ll continue to occasionally profile caregivers of all ages and descriptions who have become entrepreneurs and crusaders.  It’s a trend worth watching.