When Patient Choices Are Harmful 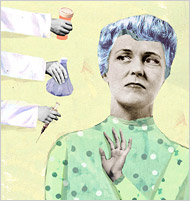 Sometimes, my son makes bad choices.  So does my mother.  Nicholas almost always decides what he wants (and what he doesn’t!) based on short term pleasure (and pain avoidance).  This means, he will NEVER choose to have an injectable medication, an enema, or go the ER, even if his life depends on it.  Luckily, Nick’s caregivers and his family know his foibles and together, we make sure that if our young man needs treatment, he gets it, no matter what.

With Mom, it’s different, but the problem is essentially the same.  She doesn’t like the food at her seniors’ residence, so she removed her name from the meal plan.  To be honest, a lot of it does not agree with her delicate digestive system, so she has a point.  But in her apartment, she can’t be bothered to eat the chicken sandwich my sister has made or even her favorite rhubarb pie that I brought last week.

Sometimes, bad choices that vulnerable people make can have terrible consequences.  My friend is a foster Mom to a LOT of children with disabilities.  One of her foster daughters had a developmental disability as well as a tracheotomy, a breathing tube that needed suctioning on a regular basis.  When the young teenager went into a nursing home for a few days to give my friend a break, the nurses did not suction the tube.  Why?  Because my friend’s foster daughter waved them away.  She didn’t like the suctioning, so she ‘refused it’.  Mucus eventually blocked the tube and my friend’s foster daughter died.

The problem of championing individual choice at all costs is particularly dangerous in the case of cognitive impairments.  Another friend’s Mom was hospitalised with the physical effects of advanced Alzheimer’s.  When my friend arrived at her mother’s bedside, she asked a nurse when her Mom had last had a bath.  “Oh, she hasn’t had a bath since she arrived here.  She said she didn’t want one.”  My friend was incredulous – “What do you mean, she didn’t want one?!  She doesn’t know what she wants, she has Alzheimer’s!”  My friend wheeled her mother down the hall and bathed her herself.

Many home health care workers and other health professionals are trained to respect patient choice.  And that, of course, is a very good thing.  But sometimes, that can have harmful, even fatal consequences when common sense isn’t part of the equation.  Have you had an experience where the rule of patient choice has been applied without the benefit of observation and common sense?