A Gift of Forgiveness 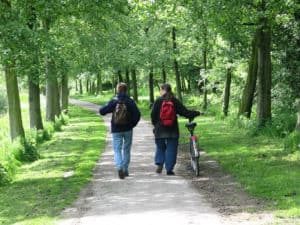 A couple of years ago I saw an ad on Craigslist from PLAN for a position as a Community Connector. The job posting really appealed to me because I have always believed that if a community is strong, it can solve just about anything. I was in!

After the interview, I left the PLAN office feeling more excited than ever. I got a phone call a few days later from Lauri, a Mentor, telling me she thought she had a match for me and wanted to know if I had time to meet the person.

The following week I met Lauri just outside Gary’s home, and she gave me a bit of background information: his family, likes, hobbies, dislikes, etc. I found out that Gary had been in a terrible car accident back in the 70’s, where he had almost lost his life and had been in a coma for many months, and as a result has no short-term memory. I also found out that it was very likely Gary had been intoxicated while he was driving on the day of the accident. This fact hit me like a tonne of bricks. Yes, drunk driving appalls many people, but I had a much more personal reason for the heaviness: a drunk driver had killed my mother. I didn’t know what to tell Lauri right at that moment; it felt too raw so I just kept quiet.

I met Gary, and he seemed to be a fun, goofy guy with a heart of gold, but I could also sense he was scared. I would certainly feel scared too if I could not remember anything. Who is this person? Where am I? Why am I here? Something told me I needed to get to know Gary. I needed to be his Community Connector.

Most of the time I did not even think about Gary’s drinking and driving. It was just the two of us telling stories, using cuss words (yes, cuss words) and having fun. There were moments when I would look at Gary and think, how could you have done something like that? I was a bit angry, but I started to see that Gary was a sweet, kind cussing man who had just made a mistake, as we all make mistakes, and I was starting to care deeply for him. Gary was paying for his mistake with years of short-term memory loss and a great deal of physical pain.

I thought I had long forgiven the man who had struck my mother almost 30 years ago. But it was while I sat in coffee shops or went for walks with Gary that I realized I had not really forgiven him. My heart grew for Gary as we got to know each other better: he told about his life, his youth (Gary’s long term memory is great) and I told Gary some of my secrets (I could trust him). I was so honored that Gary felt he could trust me. Anger and gruffness are often the first things you notice about Gary, but if you just watch for a moment you see the fear, the vulnerability, the true humanity. Gary trusted me long before he could remember my name; which took over a year.

Almost every week Gary and I go for a walk or sit in a coffee shop in his neighborhood. Staff at the coffee shop, and his neighbours, see that we are friends and they are all getting to know Gary too. All of these people are witnessing how I enjoy Gary’s company, his jokes and stories. What they do not see is his gift to me: forgiveness. I had no idea the weight of anger I was carrying until I felt it lift off my shoulders as our friendship grew. I now know that the man who struck and killed my mother is just a guy who made a mistake. This man paid for that mistake with a very short jail term, but I am sure his heart is heavy with the decision he made almost 30 years ago.