This morning I was daydreaming about the movie “The Trip to Bountiful.”  It’s a gorgeous film about an elderly woman near the end of her life who has one wish; to visit the town of Bountiful, Texas, where she was born.  Geraldine Page plays Carrie (‘Mother’) Watts, who is trapped in a tiny apartment under the care of her cowardly son and his shrewish wife. Carrie is determined to escape and return to her girlhood home of Bountiful, Texas. Seizing her chance – and her meager Social Security check – Carrie sets out on an unforgettable quest to make peace with her past.  Carrie Watts has a weak heart, but a determined and hopeful spirit.  It’s a beautiful movie about dreams realised, against all odds, at the end of life. 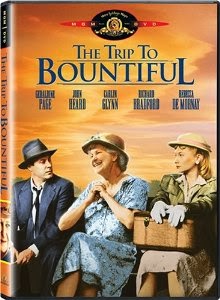 It’s the dreams of my Mom and my son that got me reminiscing about “The Trip to Bountiful.”  When Nick was small, he wanted to climb on the monkey bars in the park.  I held him up high, his legs dangling in the air, his hands reaching to grasp a bar.  Later, he expressed every Canadian boy’s dream – to become an NHL hockey star.  I knew that most kids would learn the game before other interests overtook that particular dream, so I phoned around to locate an after school ball hockey team.  Jim took Nick to the park in his wheelchair for ‘pick up’ games in the evenings at our local outdoor rink.  Sometimes, Nicholas’ dreams were within the realm of possibility IF I tried hard enough and called in enough favours from friends or family.  Often, when I couldn’t make his dream come true, I felt terrible.

Now, my mother sighs when she can’t canoe on our lake.  The air is blue when she talks about not driving.  Lately, she’s been missing ski trips to the mountains in Quebec.  Mom is 92 and it ‘makes her crazy’ that she can’t have her athletic, independent youth back.  I don’t blame her – my Mom was a great tennis player, a terrific skier and a spitfire on the road.  But should I be aiding and abetting her dreams and if so, which ones?

It’s hard when someone you love expresses an important dream that you cannot deliver on.  No waving of a magic wand will take away Nick’s disability or give Mom back her strength and vitality. So, what is the correct response when dreams can’t realised?  In my family, I’ve found it’s been important to understand the deeper meanings behind the dreams.  Is this something that my loved one really wants?  Or, is expressing the dream meant to express a sadness or anger about loss?  My response will depend on how I read my love ones’ expression of dreams.  Sometimes, even if a dream could be realised, I cannot help them achieve it.  I’m just too old, too tired, or too busy.  But other times, I nod and agree that getting old just sucks.  I add a swear word to Nick’s speaking computer and prompt him to ‘speak’ that word again and again as we rail against the barricades blocking his greatest wishes coming true.

Sometimes, I can make the dreams come true for those I love and sometimes, I cannot.  When I can’t, I concentrate on easing their sadness and banishing my guilt.  We just join hands, shrug and flip the bird to reality.  It’s the best we can do.