The Transition to Friendship 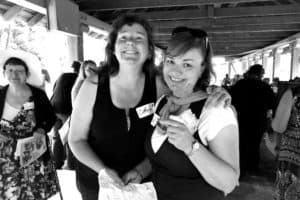 Like so many other CC’s, I decided to stay on as a friend and network member since we hav a great relationship built on trust and respect that has been established over the years. I love the fact that Cath comes to my place and pets my dog for an hour. I cherish our chats on the phone and going to network meetings where it is evident that others care so much about her too. We still talk a lot about her life goals and the obstacles she faces. Although my title has changed, our relationship is still very much the same.

Cath had mentioned at a network meeting that she wanted to change where she was volunteering. I suggested the Community Police Center (CPC) close to where she lives since the staff there are great and also because we had both volunteered there once before.

It took a couple of months until we finally picked a date to go down to the CPC to ask some questions about volunteering. Since I was no longer Cath’s Community Connector, I went with her as a friend instead of an employee. I knew all the staff there and some of the volunteers, so I was looking forward to the outing. Cath told me she only wanted to ask a few questions and was not ready to commit because there was so much going on in her life.  When we arrived, there were some rather handsome volunteers manning the front desk. I told these two men about Cath wanting to volunteer; we asked what some of their duties involved and what they liked about it.  About 15 minutes later, the Executive Director arrived (Adrien, who knew both Cath and I) and we start chatting. Cath asked Adrien a few more questions about volunteering but we kept getting side-tracked by a neighbour who came in with her dog. Adrien and I chatted about a project I had worked on in the neighbourhood, as well as some general catching up about people we had both been on committees with.

Our visit to the CPC was no longer about Cath volunteering but about many other things and at time really focused on myself and Adrien and our past work together. I tried to bring the conversation back to volunteering because that was what we were there for although we had already gotten a good amount of information. Since I was there with Cath as her friend and not a her Community Connector, I felt fine that the conversations were not all about getting Cath a volunteer position.

Cath and I went out for a drink and fries after and we chatted about the information we had gathered. I could see that Cath was not happy with how things had gone so I asked her what was wrong. She wouldn’t give me an answer so I asked “Cath did I talk too much?” Her eyes widen and said, “Yes.” I chuckled and said “You know, I was there with you as a friend, not as a connector and not as an employee of PLAN, and that is how things sometimes roll with friends.” Her eyes widened again and she said, “oh” as a grin slowly spread across her face. I thought to myself that she was finally realizing that I am a friend; a real friend.

There were two lessons for me in this moment: 1) realizing you have a true friend is not easy for everyone and, 2) being a Community Connecter takes intent and follow through for the person you are connecting for. It is very different then friendship. This is the reason a connector gets paid; they have a job to do.

Cath often talks about the stress of making friends and I understand where she is coming from. Those first few steps are so strange and delicate. I hope she sees our friendship as a safe place to land.