Symbols of Care – The Bad Ones

A couple of days ago, I was wandering around my local grocery store when I happened to notice a young man in a wheelchair.  He was smiling and chatting with a paid caregiver who was putting some oranges into his basket.  How did I know she was his paid caregiver?  She wasn’t wearing jewellery around her neck, she was wearing something like this: 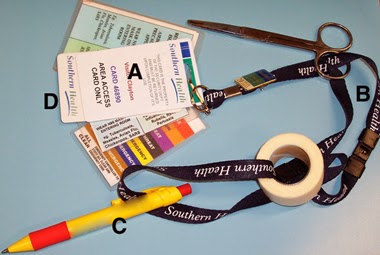 Except that there were a lot of keys on the necklace as well.  I turned to do my own shopping and thought, “hmmm… I really don’t like that.”  I actually considered approaching the woman and saying something like, “Excuse me, but do you realise that it demeans this young man when you wear a lot of keys and identity badges around your neck when you are grocery shopping in public with your client?” I wanted to tell her that the keys imply this man is in a locked residence.  They imply a kind of necessary vigilance over the comings and goings of this adult gentleman.

Funny that when Nicholas’ caregivers wear keys or identity badges around their necks, he makes them hand them over.  Nick says with his speaking computer, “I’ll take those if you don’t mind.  And you can call me Mr. Wright.”

Everyone laughs because they are friends, but the point is made.  Nick’s helpers don’t wear their keys anymore.