“Experimenting with Enemies and Strangers” was the provocative title of a workshop I attended as part of the SIX Social Innovation Exchange Summer School in Vancouver last week.  Three seasoned ‘change lab’ leaders took the stage to tell us about how they had been faced with a particularly difficult social problem and what techniques they’d used to solve it.  Caregivers suffer from a lack of support from all sectors of society, so I was especially interested in how change labs could assist us.

The model of ‘change lab’ or ‘solutions lab’ is one that I believe has great promise for caregivers and our vulnerable loved ones.  How to support adults with disabilities in times of austerity, for example is one intractable social nut that Joeri van den Steenhoven, Director of the MARS Solutions Lab in Toronto is trying to crack.  I am participating in one of Joeri’s labs – we are grappling with finding solutions for supporting adults with developmental disabilities in Ontario.  It is a fascinating process and one which began with us brainstorming about hidden assets in families, communities, government and the private sector.

Back at the SIX Conference, Adam Kahane described trying to bring warring factions together to create peaceful communities in Columbia.  Kahane writes about shape shifting difficult social problems in his inspiring book, “Power and Love: A Theory and Practice of Social Change.”  He writes, “A character in RENT, Jonathan Larson’s Broadway musical about struggling artists and musicians in New York City, says, “The opposite of war isn’t peace, it’s creation!”  To address our toughest social challenges, we need a way that is neither war nor peace, but collective creation.  How can we co-create new social realities?” 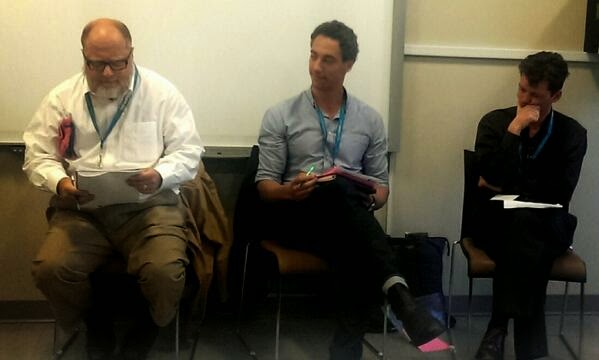 Jesper Christiansen of Mindlab in Copenhagen joined his co-presenters in reminding us that to overturn embedded and unhelpful systems in society, we need to begin with not only friends, but also strangers and enemies.  The change lab model brings together a group, each of whom fall into one of these camps.  Participants begin their difficult task of dreaming up new ways of achieving a shared goal – from ending knife violence in a social housing project to assisting people with mental illness find affordable, supportive housing.  Once a few possible new ideas are co-created, trials in the community can begin.  The good ideas that stick may then be scaled up to other communities where needed.

Later, we engaged in some real life problem solving ourselves.  Around a table, a colleague from the UK described her work with a charity aimed at creating better lives for people with developmental disabilities experiencing poverty and social isolation.   Our colleague explained, “We’re a charity that’s been brought in to see if we can work creatively with a community the national government has named ‘troubled families’.  We have a time limited contract to create a template for change that can be adopted by all the government funded service providers in our city.  But I’m afraid that for lots of complicated reasons, we’ll do our work and go away, but nothing will change in a lasting way.”   We heard that this is a community with a thriving daycare, run by local people, but enjoys little else in the way of hope or growth.  Fear, paranoia and unemployment seemed to be the daily realities of this very disadvantaged pocket of England.

As our presenting colleague turned her chair away from us (to better listen, but not engage with our problem solving process), we began to reflect on what lasting good could be forged from the charity project.  We began to focus on the town’s thriving daycare operation.  Eventually our colleague turned back to us and shaking her head, declared, “As I was listening to you discuss my conundrum, I realized that the answers are within our community.  I knew this, but perhaps I had forgotten.  Perhaps I was just very focussed on trying to locate the levers for change through our charity.  We’ll begin with the community assets and those lie in our daycare.”  It was what most people would call an ‘aha’ moment.  I reflected on how this technique resembled a mini-solutions lab.  Perhaps this could be a way to solve problems in my community and even in my family.

Later in the day, we gathered in a large banquet hall.  Adam Kahane stood up to reflect on the conference proceedings through the lens of ‘love and power’.  Kahane defines love as the drive toward self-realization and power as the drive towards unity.  As I reflected again on this idea, David Diamond of Theatre for Living persuaded us to ‘make a statue out of our body to represent what we had learned from the conference’.  My body image was of a torch, the image of power in Kahane’s book illustrations.  I decided that caregivers have love to spare, but we need power – power in our language, in our posturing, and most of all, in our families and communities. 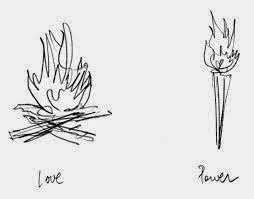 What did I learn for caregivers from leaders in international social innovation?  I learned that we must forge a movement to place power in the language of caregiving.  As I said in my last post, ‘language is culture’ and a culture that is silenced is no culture at all.  So, in my next post, I’ll introduce the beginnings of a new language of power and caregiving.