Memoir of Mourning: Journey Through Grief and Loss to Renewal (Book Review)

Perhaps you fear losing the parent you care for.  Or maybe, you fear your own death as you care for your dying relative.  Maybe you just don’t know who you will be when your loved one passes and leaves you alone in the world, without the identity of caregiver.

Claudia Chowaniec has wrestled all these demons to the grounds and lucky for us, has imparted her experience in “Memoir of Mourning:  Journey Through Grief and Loss to Renewal.” 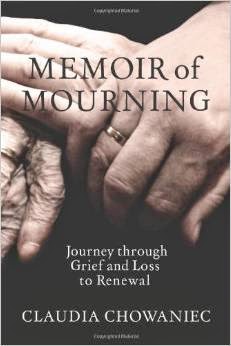 This is a book about an intense and co-dependent caregiving experience – one that lasted many years.  As a teenager, Chowaniec cared for her mother through bouts manic-depressive illness.  This was followed by more intense caring when the elder Mrs. Chowaniec developed severe Alzheimer’s and eventually succumbed to that terrible disease, leaving her daughter filled with guilt (Claudia was on holiday when her mother suffered a health crisis that would prove fatal).

This book is the product of diaries kept over years.  Chowaniec describes her writing process this way:

“Memoir of Mourning is based on memories and excerpts from the journal I began before Mom’s death.  I scribbled down my thoughts – raw, intense and immediate – on what was happening in the hospital as I tried to communicate with the medical team, Is Mom dying? I recorded the end-of-life decisions I struggled to make, when out of the blue, the doctors told me they were discharging Mom because there was nothing more they could do for her and she needed palliative care.  The journal became the only witness to my anxious bedside vigil, What will death be like? as I watched her breathe, one breath, then another, and then no breath at all.”

There are many reasons to recommend this book.  First, it is a diary, so if you want to know what witnessing death is really like, you will have a clear idea after reading Chowaniec’s urgent prose.  There’s poetry too, though.  Chowaniec is someone who writes everything down in order to understand it – and I for one, am glad she did.  The journey of love, dependency, identity, mortality and finally resilience is one that should be told first hand, not through the lens of imagination and memory.  The author shares what really happened, always in the present tense.  And it’s easy to like Claudia Chowaniec and her mother.  The author generously shares their stories, their fears and their humour. Chowaniec’s mother was a war bride who had fearlessly cajoled German soldiers into allowing her past a checkpoint with stolen groceries to feed refugees housed on her family farm.  This story and more, Claudia wrote down and as her mother’s Alzheimer’s progressed, she read them back to replay the events of her mother’s life and keep memory alive.

I had lunch with Claudia Chowaniec recently and we talked about our mothers, about death and dying, and about caregiver identity.  We talked about the benefits of counselling and the satisfaction in counselling others.  I was sad to learn that after her mother died, Chowaniec’s husband had been diagnosed with cancer.  Her caregiving journey is not over.  As we mused about our next books, I said a silent prayer that my new friend’s spouse would fully recover after his latest round of treatment.

The intense personal drama of tending to a dying loved one is not a subject for dinner table chat.  It is life-changing and yet frequently, we do not have the experience or knowledge to decipher the many meanings in it.  Claudia Chowaniec has done the work and shared it for all who walk that path.  I am grateful that she did.