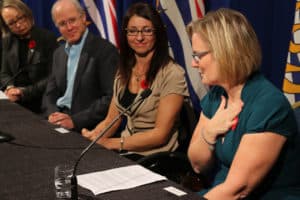 In March 2014 a number of PLAN families met with the Minister of Social Development and Social Innovation. The purpose of the meeting was to share our desires and dreams. Specifically we encouraged the provincial government of British Columbia to adopt a new framework for supporting our family members with a disability. The new framework includes: focusing on what people with disabilities can do rather than what they cannot do; on assets instead of just needs; and on supporting the inter-dependence of individuals rather than fostering continued dependence.

PLAN families asked government to shift disability benefits from a welfare model to a well being model. Welfare is intended as a temporary system of last resort. Our children’s disability is not temporary, and their needs require considered thought and creativity to address the complexities of living with a disability. We encouraged government to consider disability income and benefits as the foundation upon which individuals and families could build upon. That disability benefits become a “floor” rather than a “ceiling”. This means shifting from the welfare thinking that limits financial well being to one that secures financial well being and invites the contributions and gifts of family members and others.

With today’s announcement’s the BC government confirmed they listened to and trust families and individuals with disabilities to determine their own futures:

“British Columbians receiving disability assistance will be able to hold significantly more assets and receive financial gifts and inheritances with no impact on their monthly assistance thanks to changes being made by the provincial government.

Beginning Dec. 1, 2015, the amount of assets that people receiving disability assistance may hold without losing eligibility for assistance will rise to $100,000 for an individual with the Persons with Disabilities (PWD) designation, and $200,000 for a couple where both have PWD designation. Currently, the asset limits are $5,000 and $10,000 respectively.

In the case of an inheritance, the higher asset limits will free up many clients from having to set aside that money in a trust.”

PLAN applauds the Minister of Social Development and Social Innovation and her team for making such a significant shift away from the welfare paradigm. The changes announced today provide a framework for people with disabilities in BC to have the security and opportunity needed to grow their wealth and realize their dreams.