"What I learned from travelling with my brother"

A growing number of siblings are stepping into the role of primary caregiver for their sisters and brothers who have a disability. Through her 2016 “Failure Report”, Helen Ries began sharing the story of the transition she and brother Paul faced when their parents passed away.

In her recent blog piece reflecting on a trip to Europe, Helen continues to inspire honesty and clarity about the work of building inclusive and diverse communities – here in Canada and around the world.

“What I learned from travelling with my brother” 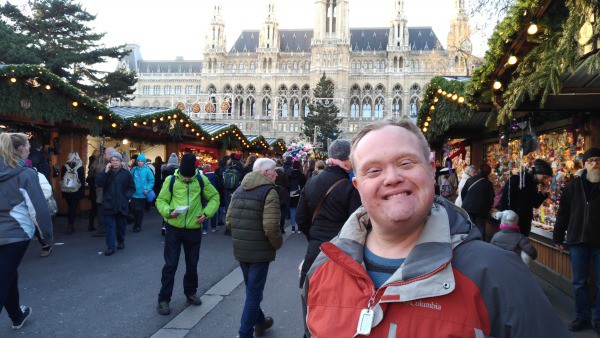 After my mother died I was full of remorse for my brother’s life. My parents had been his window to the world, they had travelled all over, taken many trips and ocean cruises, been to dozens of theater and musical events, visited the Louvre and other iconic galleries. I wanted his great life to continue, how would I ever be able to fill my parent’s’ shoes in this area.

Not long after that moment of reflection, a flyer came in the mail advertising a river cruise along the Danube. It started in Budapest, stopping in Vienna, Krems, Passau, Regensburg and ending in Nuremberg. I called the travel agent and booked it right away. This afterall is what my parents would have wanted for him, the great cities of Europe. A river cruise would be easy and accessible, and for Paul hopefully familiar.

The trip was a great adventure. Perhaps a bigger adventure than I imagined. I have learned so much from travelling with my brother.

A mere 12 hours after landing in the beautiful city of Budapest, visiting the Christmas market and sharing a wonderful dinner, I was flat on my back in the daze of a stomach bug. For 36 hours I rushed back and forth to the bathroom. I sweated, fainted and slept. Paul sat patiently playing on his iPad fetching me drinks from the bar. Our hotel was quite small and had no restaurant so Paul ate a bag of gumdrops I had brought with me for lunch and dinner. Thankfully there was a breakfast that he went to on his own.

In retrospect, I feel guilty because I wasn’t really prepared for our trip. My travelling days have historically just included tossing a few things in a backpack or suitcase and leaving. I never considered the varied possibilities of something going wrong. I had no medications with me, not even gravol or imodium and of course I got sick on the weekend when the shops were closed. I had no snacks beyond gumdrops and I had chosen a smaller hotel, it was cheaper than the bigger chains, it had no real concierge service or food ordering capabilities.

Thank goodness Paul makes himself at home easily and could access what little the hotel had to offer and negotiate Hungarian money to pay for the much needed drinks. When travelling with a person who is vulnerable, the consequences from something going wrong are not insignificant, being prepared for issues and problems is very important.

Learning #1 – Travelling with my brother, I learned that being unprepared is not safe or responsible. I should have paid that bit extra for a better hotel, packed a first aid kit and brought along some good snacks. When you are travelling with a vulnerable person you need to do your utmost to be prepared for the inevitable.

When we finally boarded our river cruise ship. I was disappointed to find our fellow passengers, made up of citizens of the other English-speaking countries, seemed to be rather unwelcoming and closed. We had a hard time finding a table to sit at for dinner. When we did the conversation was directed mostly at me, very little if any was directed at Paul. He started to get frustrated. I found myself trying to build bridges and smooth waters, by “explaining” my brother to the other guests or trying to entice my brother into conversation which he outright rejected. I was stuck in the middle. This has always been my way, I have always acted as my brother’s ambassador, trying to open the doors and gates to the world. This time, I was failing.

On the third night when Paul was begging me for us to eat in the lounge alone instead of the dining room with others, I decided that I was done with trying to “explain” or “translate” Paul to others. As fellow humans and co-travellers, others have a responsibility to learn, understand and engage. It is not my job to facilitate. Also the “explaining” was more about me than about Paul anyway. I wanted others to feel comfortable because that would make me feel comfortable. I think Paul felt objectified and set apart. So if he doesn’t want to talk, that was fine. He started bringing his colouring books to dinner which seemed to not only make Paul happy but also started a lot of conversations, naturally.

Amazingly when I stopped my over-the-top explaining, bridging and smoothing, Paul opened up to the other people on the boat and vice versa. Leaving the boat he knew more people than I did. I was sorry it had taken me three days to figure this out.

Learning #2  – Travelling with my brother, I learned that trying to make other people feel comfortable in the presence of a person with a disability is actually a huge, self-centred act of discrimination and prejudice. It assumes that someone’s difference needs to be explained. Would I have done that if my brother from another minority group? Definitely not. It also relieves other people from their responsibility to learn about other people. We all have that responsibility to lovingly, opening and caringly learn about our fellow human.

While travelling with my brother it struck me that I have been living in a bubble. For all that is not right in Canadian communities for persons with disabilities, we are not doing too badly. In Canada, people are generally friendly and interested beyond the story that insinuates some kind of  “charity case”.  I was struck by how many people wanted to let me know that I was a “good person” for taking my brother on a holiday. I found this disgusting. Isn’t it usual to travel with your family for fun, shared experiences and quality time together? While my rose coloured glasses might be on a little thick at the moment, I think as Canadians we do a good job of not making a lot of assumptions about each other. We understand the fabric of our society is diverse and we, as a rule, accept and welcome this.

Learning #3 – Travelling with my brother, I learned that we as Canadians have done some great work in diversity and inclusion that has trickled down to the individual level. I think for the most part as individual Canadians we are open, accepting and welcoming to a wide range of people.

Finally on this trip, I re-learned a lesson I have been learning, learning and learning over again these past two years. That is to just let things go. That stomach bug I told you about, as it turns out it was contagious. No sooner than our boat had left the harbour and we were chowing down on Cheerios at breakfast when those Cheerios decided to revisit Paul as he sat at the table. I realized that he too would be out for 36 hours which means that the much anticipated visit to Vienna would not happen. Vienna had been a special place for our father. I had spent months orienting Paul to Vienna, Mozart, Strauss, coffee houses, Sachertorte and the Christmas market. I was devastated that we would not be able to do, see and taste all these things and love Vienna as our father had. How, of all the destinations on this trip, could we have to miss Vienna? I cried. I was tired of feeling heartbreak for my brother, for me. From his sickly state Paul looked at me and said, one day we could come back. I cried some more.

In the early afternoon Paul perked up a bit and we took a cab to the Christmas market. It was absolutely beautiful, the best by far. Paul was in heaven. His joy and excitement, even in his recovering state, was what I had dreamt of for him from this trip. I realized that while it wasn’t as I had planned, my intentions had been met. My crying a self-indulgence.

Learning #4 – Travelling with my brother I learned, again, for the millionth time, that I have to just let things go. That things happen that you can’t control. Things happen that you shouldn’t control. Accepting the path that life lays down before you is not simple or straightforward but it is easier than non-stop fighting for an ideal that is a fabrication anyway. I am certainly not saying, you just have to let life “happen to you”. I am saying that swimming upstream all the time can be exhausting. It is a relief to ride the wave train sometime. It can also be a lot of fun.

In the end, stomach flu and all, our trip was wonderful. We shared a lot of laughs, enjoyed our time together and the beautiful sites on offer. The break from our usual routine and relationship dynamics was welcome too. In a couple of years we will probably do a big trip again. Paul is thinking he would like to go to Ireland.