We’re pleased to share another guest post and podcast from Eric Goll, founder of the Empowering Ability Podcast. His work will be featured regularly on PLAN’s blog.

This is the Story of Michael Mainland’s incredible ordinary life.

Michael is 38 years old, works at Boston Pizza, lives in his own house, has a roommate, and volunteers regularly. What may come as a surprise to some is that Michael has a developmental disability that over time resulted in Michael becoming non-verbal, and has reduced his fine motor skills. I had the opportunity to interview Michael’s mother, Alice Mainland, to learn Michael’s story and to learn how Michael has created his ordinary life.

*You can listen to the podcast to hear the full story and gain all of the lesson’s learned by Michael and his family.*

In the 2 months before Michael graduated from high school, Michael and his family realized they had a problem; there would be nothing for Michael once school ended, and one of his parents would have to stay home to support Michael. As a result, the family would drop down to a single income. Alice started making phone calls to various support agencies, local government, and basically anyone with a phone number that might be able to help. The people she called were willing to help! With the support of a few agencies the family was able to piece together support for Michael, which allowed the family to stay a two-income family.

Alice shares, “You don’t know what resources are available to you until you ask. “

At 29, Michael had the opportunity to move out of home because of a conversation 4 -5 years earlier when Alice was searching for support for Michael. 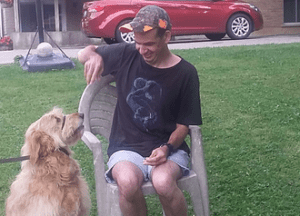 Michael’s family purchased a duplex where Michael lives with a roommate in one unit, and a supportive neighbour lives in the second unit who is available for overnight support. The family focused on creating a great home for the supportive neighbour, and this strategy has been effective at attracting and retaining long-term tenants.

The first few weeks Michael lived on his own was a worrisome time for Alice and her husband, however their worries didn’t become a reality.

During the week Michael lives at his own house, works at Boston Pizza, and volunteers at the local foodbank. On weekends, Michael gets to spend quality time with his parents on their rural property. Alice and Michael often run errands in town on the weekend and Michael has 2-3 times the number of people saying hello to him compared to his mother. This is a great sign that Michael is building relationships in his community.

What’s next for the family?

To ensure continuity in Michael’s future his family is looking at forming a micro-board. The purpose of the micro-board will be to help manage the home, and to help Michael make future decisions.

Lessons we can learn from Michael and his Family on living an ordinary life:

*You can listen to the podcast to hear the full story and gain all of the lesson’s learned by Michael and his family.*

Eric Goll was inspired to create the Empowering Ability Podcast by his sister Sarah, who has a developmental disability, to provide a platform for important stories to be told.  It is a great place to hear fresh perspectives to inspire people with disabilities, their families, and the broader community.