The Sound of Music: Throwback Thursday 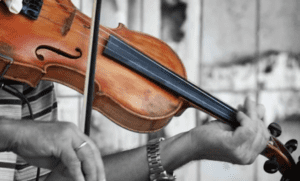 This week’s Throwback Thursday post comes from our June 2011 Newsletter. It’s a piece written by Sandra Nahornoff about Edward’s love of classical music and his contributions of appreciation.

Edward can’t talk. He smiles and hums if he’s happy, he frowns and moans when he’s upset, sad or hurting. With the aid of physiotherapy and constant support from caring staff Edward grew strong enough to be moved little by little from his bed to a wheelchair. Because of that, people around him believed there would be access to a world he had never seen before. When we visited Edward to figure out his interests, the staff said, “We notice he enjoys listening to symphony music. He smiles when classical music comes on the radio.”

Bob Harkins was president of Project Friendship then. He and his wife Barbara love classical music too and regularly attended the symphony. They invited Edward to go with them to an upcoming concert. It was to be Edward’s first outing without staff and no one knew if he would enjoy live music. Maybe it was the radio version he enjoyed? Worries proved groundless; Edward loved the concert. He beamed with pleasure and his few hums were joyful. It was the first of many concerts the trio would attend together.

Edward’s obvious pleasure led us to ask John Unsworth, symphony director and conductor, if Edward could attend the symphony practices. He was very welcoming, but the high school building was not. The practice room was upstairs above the concert hall and not wheelchair accessible in the evenings.

The search began for someone with authority in the building and a willingness to bring Edward through the school and up the elevator to the band room. It didn’t take long for Patricia Clifford, the custodian, to offer. During her shift, she brought Edward through the maze of locked doors and up the elevator. Soon he was attending the weekly practices as well as concerts and came to know Patricia, John and the musicians. Enjoying the practices gave him the chance to hear the music take shape before the actual performance.

Edward began humming along to the music, expressing his fondness for particular pieces. The musicians often tried to work out whether he favoured the strings or the winds. They soon discovered he was very responsive to Mozart and flashed huge smiles whenever it was played. At one particular concert, the symphony was playing “Adagio for Strings” by Samuel Barber, the theme song to the movie Platoon. The music reached a climax, stopped abruptly and in the silence, you could have heard a pin drop. The music started again slowly and began to build toward a crescendo. Suddenly, Edward exclaimed, “Oh, boy! Oh, boy!” What a shock! No one had any idea that he could speak words. For those of us who understood, it was sheer delight to hear such positive responses coming from a man who had been silent for so long.

Edward’s gift is his love of classical music. His appreciation for the musicians themselves is his contribution. His connection with the symphony has created so many opportunities for him and he’s developed lasting friendships, complete with hums and smiles and, now and then, a few “Boy, oh, boys!”